And the VAWA Award goes to…

Making sure our state remains proud, our intrepid Senator Ron Johnson has done his dang darnedest to ally the upper Midwest values of “where the women are strong and the men are good looking” with those of Texas and Kentucky, Utah and Wyoming, where ladies’ night is ladies first in the back of the pickup truck all git-‘r-done and don’t holler none now y’hear?  Yes, our champion of democracy who is living proof that anybody can be elected to Congress – no, seriously: any body – joined the upper crust of such conservative colleagues as Tom Coburn, Orrin Hatch, Rand Paul, Mitch McConnell, Pat Roberts, Jeff Sessions, and Marco Rubio by voting against renewing the Violence Against Women Act (VAWA) last week.  And when I say last week, let me be more precise: voted against violence against women two days before Valentine’s Day.  Once again reminding us that liberals might have the bleeding hearts, but it’s conservatives who are the real romantics.

Here’s how bad this looks: even the two Republican senators from as red as it gets Mississippi voted to renew VAWA.  So did Georgia, Arizona too – regions hardly considered bastions of feminist Yin.  The Senate overwhelmingly voted to renew VAWA, 78 to 22.  (Note: all 22 nays were cast by Republicans, and with the exception of one – Lindsey Graham – all were men.)  (Note, another: I’m kidding about Lindsey Graham; he’s actually a man.  But the point is the only ones to oppose VAWA were Republican men.)  For the full breakdown of who voted how and where they’re from, kindly check out this map.

So in honor of the Oscars coming soon, I would like to nominate Ron Johnson for the VAWA award, aka “Various Anti-Woman Assholes.”

What’s the deal with Ron Johnson from Wisconsin anyway?  Beside the obvious, the former millionaire CEO of a plastics company in Oshkosh, Wisconsin – endowed perhaps with as much intimate knack for the Bill of Rights as Bernoulli’s principle – declared VAWA “unconstitutional.”  That’s right – the demonstrably bipartisan bill that has been reliably renewed since being signed into law in 1994 that now awards Native Americans and homosexuals protection against domestic and dating violence, sexual assault and stalking, in every community throughout the nation, was declared unconstitutional by Mr Plastic.  On what grounds does the gee-whiz kid with zero political experience before being elected United States senator base his constitutional rebuttal?  Let’s call it the NIYBY provision or, Not in Your Backyard.

Under the new bill tribal courts can now prosecute men who are not American Indians when they are accused of abusing/assaulting/stalking/etc’ing an American Indian woman on a reservation.  Prior to this, the jurisdiction of tribal courts extended only to Indians – apparently, if you were white you could not be extradited.  This loophole granted monsters access to a recurring nightmare for many Indian women, particularly those in isolated rural areas far away from non-tribal authorities.

Now, before examining with what our constitutional law wunderkind of a freshman senator takes issue about this provision, allow me to illustrate a dramatization that is all too common amongst Native American women.

Imagine a modern day, unDisneyfied Pocahontas who, after risking injury upon herself by interceding on John Smith’s behalf seconds before he was to be bludgeoned to death, says yes to his offer of buying her a drink as thanks for saving his life.  They go out, hit it off immediately – “we have so many things in common, it’s crazy!” Pocahontas would write later in her diary; “it’s like we’ve known one another for ever…”  John is witty and dapper in that British way, all urbane charm – a Hugh Grant with a bristly beard and maybe a galleon tattoo on his bicep…and a penchant for wearing breeches, buckles, lacey collars, and bejeweled capes  “But it’s like he becomes a different person after he’s had a couple drinks,” her diary might go on.  Indeed, the man whose coat of arms read “to conquer is to live” was arguably more swashbuckling than suave.  John could have his any old way with her if his transgressions were on the Rez, and there would be virtually nothing that either the tribal authorities or Jamestown could have done about it.  The perfect crime, repeatedly.  Being white, the tribe had no power over him, and if the attack happened on tribal land, the state government could not or would not bother intervene.

This nightmarish loophole is not a hypothetical scenario; it happens all the time.  Native American women historically outnumber their peers in domestic abuse.  According to Senator Tom Udall of New Mexico, Native American women are more than twice as likely to be raped: one in three will be raped or the victim of attempted rape; one in three will be assaulted while three out of five will encounter some form of domestic violence in their lifetime.  To put that in context, the numbers for non-Indians are as follows: nearly one in five will be the victim of rape or attempted rape, one in four will be the victim of physical abuse, and one in six the victim of stalking.  (These statistics come from a recent study conducted by the Center for Disease Control.  The shorthand fact sheet can be found here; the full National Intimate Partner and Sexual Violence Survey itself can be found here.)  In remote Alaskan villages, the numbers are even more unconscionable, with estimates as high as 12 times the national average, according to the Alaska Federation of Natives.

Random question: if Republican Senator Lisa Murkowski of Alaska joins her Democratic colleague in voting to reauthorize VAWA, what constitutional concerns over tribal authority does Ron Johnson see that she doesn’t?

When an Indian woman is raped or assaulted by a non-Indian, her only recourse is to seek justice from U.S. attorneys, who (a) are already overburdened and understaffed and (b) have offices often hundreds of miles away.  The reality is that justice is not served, allowing perpetrators horrible power to perpetually dehumanize – what I would call domestic terrorism.

Yet rather than take on this nightmare and close the loophole of generational abuse, Republican men are worried about what will happen to the rapists.  Maybe behind the haze of their two-bit pettifoggery over due process or whatever specious paranoia so foams at their mouth lies some ancient latent fear that Native American women the land over will clog the courts with backlash lawsuits, demanding reparations and whatnot, the likes of which would make the Vatican coveting its molesting priests look like traffic court and paying parking tickets.  Even if such fatuity were true – and surely it’s not – would that really be sufficient cause to do nothing and provide no recourse to Native America women, who after all are – ring the bell! – American citizens also?  Were such constitutional concerns at the fore during the passage of the wide-sweeping Patriot Act? 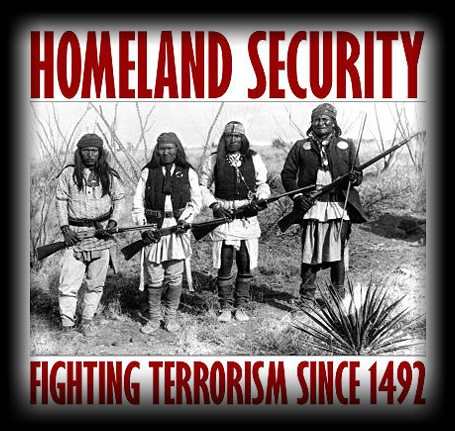 Well, no.  All of the 22 Republican male senators who voted against VAWA last week (at least those who were in office in 2001*) voted with gusto for the Patriot Act.  All of them.  So what if you are an American citizen on American soil loosely if not illusively associated with evildoers (by which it is meant Jihadist Muslims, just in case any uppity smart-alecks from Smith or Swarthmore thought rapists were doers of evil)?  Indefinitely detained are you, maybe even water-boarded, arrested without charge, permitted no access to council, and eventually tried not by a jury of your peers in civic court, but a military one.  No concerns of “unconstitutional” there.  But having a Native American woman have the asshole who offset her jaw and cheekbones hauled into tribal court because that’s where she lives and where the abuse happened?  Oh dear God, why don’t liberals just set the Constitution on fire?

(The one and only lonely No vote to the Patriot Act was, of course, boldly cast by our beloved Russ Feingold, ousted in 2010 by none other than Ron Johnson.  Here are some of his remarks about the importance of reauthorizing VAWA in 2005 and again five years later, for those of you — like myself — still sore about losing Russ.)

Hold on — there’s one more way more amazing matter that earns Ron Johnson from Wisconsin the coveted VAWA award.  In a determined minority of five against 93, Mr Johnson joined four other far-right Republican senators to vote against an amendment to combat human trafficking.  Now, on the face of it, one has to ask: who the hell in their right fucking mind would ever oppose combating human trafficking, right?  Buying and selling twelve-year-old girls for indentured servitude and the sex slave trade?  Seriously?  Pinch me — punch me! — wake me up from this horrible dream.  Unless your name’s Vinny or Vladimir and you’re a member of the mob.  Otherwise, holy shit!  But this ought not come as such a surprise from a man who gave public testimony that it would be bad for business for pedophile priests to be brought to justice.  Oh, yes he did.  Watch and weep:

Didn’t we settle human bondage during the Civil War?  Not so fast!  According to the FBI, human trafficking is the “fastest-growing business of organized crime and the third-largest criminal enterprise in the world.”  Take that, Lincoln!  (Ironically, the very same day Ron Johnson and four others voted against combating human trafficking was the birthday of Old Abe.)
Apart from the two days before Valentine’s Day symbolism, it’s worth pointing out that this year marks the 50th anniversary of Betty Friedan’s groundbreaking work, The Feminine Mystique.  We’ve come a long way, baby, for sure.  But damn do we have a long way to go yet.