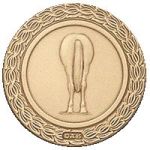 I was not intending to break my scribble silence with two cents about a Republican candidate in Missouri running for U.S. Senate about whom I know positively nothing.  After the essential recall of the Wisconsin recalls, the wind in my sails for explicit political scribbling has flagged off.  But sometimes, even for a young curmudgeon, the bait is too irresistible, the bad taste and foot-in-mouth buffoonery such a spectacular eclat, that one risks ignorance by ignoring it.

Enter the court jester du jour, Todd Akin.  I was out of state when this latest gaffe debacle/ Freudian slip hit the press over the weekend.  Because I am old-fashioned enough, I treat email like regular mail in this sense: when I am away from home, I will deal with it all upon my return.  No smart phone, no tweets, no iPads or tablets.  Not even a quick dose of reality with a shot of espresso at an internet cafe or a lackadaisical saunter at some public library.  But I do read the paper and listen to the radio, so I had heard all about what Todd Akin said — and then later said what he meant and should have said instead.  I knew I would be coming home to countless emails about this as if I had had my head in the sand.  I counted no fewer than sixteen such emails just with the name “Todd Akin” in the subject line, not counting less specific ones with the buzzwords of “rape” or “legitimate.”  One-liners like “Unreal!” and “Dangerous and Wrong,” “Repulsive” and something else connoting the next cannon fire from the war on women.  I understand the motivation behind these attention-grabbing headlines, and I agree with their outrage.  I do not agree, however, with their conclusion that Todd Akin should step down.  END_OF_DOCUMENT_TOKEN_TO_BE_REPLACED

Green Is The New Black: What Ecoterrorism and Crack Cocaine Can Tell Us About Pro-Life Extremists

First off, an editorial consideration: the last time a scribble indirectly dabbled in abortion and race the shit hit the fan like a fanatic orangutan with a crop duster but no Pepto-Bismol.  From that experience I have not learned that I should not be even scribbling about such emotionally charged issues in the first place, in part because I am by nature a stubborn person, but mostly because it has long been a cherished belief that to elicit a passionate response is generally an indication of doing good work.  That said, if I am reaching out exclusively to a certain segment of the population, then I am being a bad writer.  This blog is admittedly pretty liberal.  But I would regard myself an amateur with written-off irrelevance if I only pissed off some of the people all of the time; far better would it be to piss off all of the people some of the time.  For then, at least occasionally, I must be getting something right.  Not that pissing people off is my intention; I am not a provocateur.  (Actually, I’d like to consider myself a fairly nice guy, who despite a lot of weird stuff was given good manners.)  I personally have no interest in taking up a controversial topic for controversy’s sake — I will leave that kind of dare-devil skullduggery to the stirring pots of schlock-jock op-eds and braggadocio bloggers.  For me the point is to take up a controversial subject unflinchingly when its moment arises.  If I fail to reach out with a requisite amount of tact or only pretend to see things from the opposing perspective so as to seem more reasonable or circumspect, then I am genuinely sorry and I ask that you accept my apology.  In this scribble, as in many of my endeavors, I seek only to speak truth to power, and if I happen to piss off anyone, let it be them — those whose vested interests see living things as commodities and codify justice with dastardly and bastardized double standards. END_OF_DOCUMENT_TOKEN_TO_BE_REPLACED

If Caesar were alive today, he’d be stabbed to death with a speculum.  Three days shy the Ides of March, there is something disproportionately apropos for the Republicans in the State Assembly to make use of its limited time left in the current legislative session to vote on three bills that further the national war on women.
END_OF_DOCUMENT_TOKEN_TO_BE_REPLACED

Something is rotten in the state of Indiana.  Or as one lawmaker has it, America — as in the Girl Scouts of America. Filed under “So Fatuous, Even The Onion Couldn’t Make This Shit Up,” Republican State Assemblyman Bob Morris of Fort Wayne is strident in his one-man mission to expose the shocking truths behind the Girl Scouts of America’s two-pronged credo:
1) to be “a tactical arm of Planned Parenthood” that makes girls “more receptive to the pro-abortion agenda”; and 2) promoting “homosexual lifestyles” while honoring noted “feminists, lesbians, and Communists” at the expense of prayer and singing Christmas carols.
His faith-based evidence and methodological praxis of research?  He Googled it. END_OF_DOCUMENT_TOKEN_TO_BE_REPLACED

Unplanned Parenthood: the Hit or Misogynists of Wisconsin Politics

If you listen just long enough you can hear Margaret Sanger crying in her grave.  As has been par for the “coarse” since the first second Governor Scott Walker came into office swinging and slinging, and Republicans toed the line striding and stentorian on their high hoarse hearse of this legislative session, the next step in making Wisconsin gallop backward is defunding Planned Parenthood.  She who wrote in a pamphlet nearly a century ago, “No one can doubt that there are times where an abortion is justifiable but they will become unnecessary when care is taken to prevent conception.  This is the only cure for abortions.”  She would be wailing, were she alive today.  And then fighting like hell. END_OF_DOCUMENT_TOKEN_TO_BE_REPLACED

END_OF_DOCUMENT_TOKEN_TO_BE_REPLACED

Posted by t corcoran bauer on May 16, 2011 in Cry Uncle Samerica, National, OMG GOP!, Pretty Damn Random, Strange Inconsistences, Suffragette City, You Turn Me on Like a Machine!